Sister Ann came home from work Friday and
looked a little shaken. They laid off a dozen people
from first shift. Thankfully, not her. She won't find
out until Monday how many from second shift got
the boot.

She works in a lab for a company that tests oils
and such from transformers. Many of their customers
are in New York, California, Connecticut and other
states that are shutting down. Thus, a drop in
their business.

There is no union so they don't have to lay off by
seniority. Ann has worked there over 20 years but
a co-worker with 30 years was one of the ones let go.
They've started checking everyone's temperatures
before they come in to work and they adjusted the
work schedules so there is no overlap between shifts.

Our brother in Cinncy is a salesman for a manufacturer
and is working two or three days a week from home.
Several of his customers stopped allowing "outsiders"
into their facilities, so a lot of his work is done by phone
or computer face-time.
His daughter has been working from home for two
weeks... for the Council on Aging.
His son works for Northrup-Grumman writing
software and is now also working from home except
when he is working on classified gov't jobs.

Everyone is grateful to still have jobs but it feels like
they're all walking on eggshells hoping the other
shoe doesn't drop.

Carol is starting to get cabin fever because she can't
go to church. Liturgies are cancelled. She needs to
avoid people because of her shakey immune system
anyway, so I'll probably be doing any shopping for her.
She's been staying busy at home doing her laundry
and sanitizing the bath and kitchen.

I'm trying not to worry but sometimes I catch myself
wondering how long this whole situation is going to last.
We are close enough to the interstate(s) that we could
hear the traffic when sitting on the porch. Now?
Barely noticeable.

It's just so surreal. It feels like the world is disappearing. 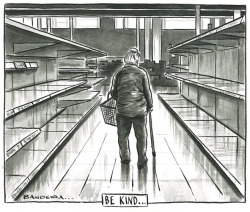 It is the quiet that sticks out the most. I live in a little real Mayberry, without a sheriff or deputy. Seven to ten live here or nearby, but no town one. Even so, semis and road traffic, even nearly in a, if larger, geographical cul-de-sac, was rather heavy. Dozens a minute to decade of minutes, night and day as the world became hyper industrious.

Now? A vehicle every ten is busy, save shifts. Oh, even in stores, where there are many people, there is a hush, as if in the library... or funeral. Quite a thing.

Not that these times are desirous, but it is momentous. Remember them, write about them. Someday, after these things are forgotten as a living thing, the young will seek answers to why the quiet... and separation. I don't think that will change back, especially if there really end up being many dead. The world is changing. I don't think in completely bad ways. It already happened for me, thirty years ago. It's not all bad.

I think we will learn much about many things, even if we don't realize it until later. Hopefully more good lessons than bad.

Mi just went on lock down @midnight and the silence is the very first thing I came across at 2am.

I like it but I doubt may fellow slum rats feel the same way.