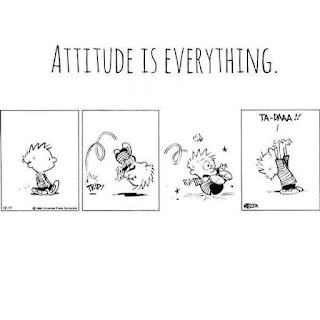 Email ThisBlogThis!Share to TwitterShare to FacebookShare to Pinterest
Labels: attitude, Calvin, Calvin and Hobbes, works for me.

I think I can breathe again...

After a three month hiatus from all her cancer meds,
but in the meantime a plethora of scans and other
testing, Carol started a new chemo treatment this month.
She goes two Fridays in a row, skips a week and then
repeats.

She gets the third dose this Friday and I'm pretty
sure I can already see a difference. You see, the cancer
looks like a red rash across her chest. The good news is
that after all the tests, there appear to be no signs of
any cancer in any organs, bones or lymph glands.
This treatment is supposed to reduce the cancer on her
chest so they will have a smaller area to attack with radiation.

So far, the side effects are minimal. Mostly just being tired
the day of and the day after treatment. But, it's early,
so who knows if any other yuckies will show up later.
We'll deal with it if that happens.

Other than that, we're all completely, thoroughly and
most definitely ready for this Summer's extreme heat
and humidity to be gone. We don't have a/c, so other than
open windows and fans on high, it can get uncomfortable.
I really hope September will be milder.

baa-baa black sheep
give a dog a bone
Mary had a little lamb
cradle and all.
one, two buckle my shoe.
e-i, e-i, Oh!
keep it simplestupid.